RSS
← Simple tips understanding injuries are very different … Part 1 of 2
Laughter as brain injury medicine … what did I ask for? →

A little over a year passed.  I didn’t want to attend my high school senior prom.  It just wasn’t my thing.  My mother wanted me to attend.  I told her I would go with another person I knew and at the last-minute he couldn’t go.  I never attended dances of any sort.  It just wasn’t me!

Al jumped at the chance to take me to my high school prom when he learned of the situation.  So, on June 4, 1971 he arrived late picking me up.  So late, we couldn’t eat dinner.  Dinner was served and cleaned up!  I had a horrible time and I told him such.

In spite of the fact I had a horrible time he convinced me to attend after-prom festivities!  We were lost for hours.  I can’t tell you how many times we crossed Pettibone Road.  I wasn’t familiar with Solon, Ohio and either was he.  In the dark of night, it’s not fun getting lost with someone you hardly know!

We finally arrived at after-prom early morning hours around 2 or 3 am. Many classmates were just arriving because they were lost!  That was a sigh-of-relief!  After-prom was fun!  It wasn’t just a style show, so I didn’t regret going.  We stayed only a couple of hours because by time I got home it was 6:00 am and my dad was waiting for me!

Believe me, I was naïve and there was nothing happening of a sexual nature.  I didn’t even like my date! It was clear as day we were honestly lost and no excuses! We were just lost in the dark of night in a strange area! I haven’t even kissed this young man. I had no interest in him and I told him.  There was no place in my heart for him.  Trust was very difficult for me.

We went to Cedar Point in Sandusky, Ohio on Sunday for additional after-prom festivities.  That was more like me!  Laid back, relaxing, picnic and fun-loving events!  He wanted to buy me a huge bear and I didn’t want anyone to spend anything on me.  On this bear’s red ribbon was a huge bumblebee.  It was an adorable feature! I reached out and touched it, and it flew buzzing into my face!  Who would have ever thought it was real?

After that, he simply could not resist buying me this big brown bear with a red ribbon! I was so stunned, I accepted this kind gesture.  Even though prom weekend turned out  fun, I still wasn’t interested in pursuing a relationship of any sort.  I was totally honest with Al. 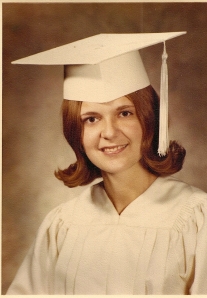 I did not know why he remained so persistent to see me until one day early in the relationship he told me he’s never dated a young woman who was as honest and forthright as I was.  I didn’t pretend I was having a good time at the prom.  I clearly let him know I had a horrible time and was not interested in going to after-prom with him.   I let him know I did not like him, and I did not make excuses. He encouraged me to just give him a chance.

I gave him a chance and here we are nearly 42 years later and now married 40 years, December 9 1972.  Our courtship was not easy.  He lived 60 miles away, or about a 90 minute drive.  There was no direct route from Alliance to Cleveland on the highway.

We depended on the United States Post Office and wrote daily letters during the week and saw each other on the weekends.  He worked full-time at Gem Clay and attended Kent State University part-time with a major in political science. I worked full-time and many hours overtime at Hauxhurst, Sharp, Mollison and Gallagher, a law firm in downtown Cleveland and attended night classes.

He was a perfect gentleman.  A couple of months passed and I began to fall in love.  He was already in love with me. Our favorite song was “You’ve Got A Friend” by James Taylor.  The lyrics were perfect for our situation.

For a year or more he sent flowers to my place of employment every Friday, but I asked him not to continue his kind gesture.  First, it was costly but second I appreciated all I meant to him and couldn’t continue to accept them.  Since then, I get roses every anniversary and I do appreciate his kind gestures.

After Al finished studying and I worked overtime on Saturday’s we would spend time together.  He stayed at my grandmother’s house on 75th Street on Saturday nights. Our dates consisted of going to the laundry mat on Saturdays to do our wash.  Can you believe we enjoyed doing the basic things in life? I was a fairly cheap date.  All we needed was quarters, dimes, and nickels for laundry machines!

Sunday’s we usually went out to dinner at The Mark Restaurant at Burke Lakefront Airport.  In the late afternoon or early evening we’d go to our favorite ice cream place, Helen Hutchley’s on Detroit Road in Lakewood, Ohio.

It was a great place to sit and chat in privacy.  Albeit, as private as it can get in a public place! We should have been forewarned because it was just down the street from my mom’s favorite place, Franklin’s Ice Cream. That was convenient for all the actions yet to come!  Who would have ever thought?

Our first movie that we saw at Westgate Shopping Center on Center Ridge Road was Lady And The Tramp!  It was a pleasure to watch something so light-hearted!  One of the first goofy things that happened in our lives occurred at Big Boy’s in Westlake.

We ordered a dinner and Al decided he needed to use the restroom.  Without looking, he stood up just as the waitress was passing our table with a full tray of food over her head.  The entire tray of dinners went flying and crashing about!  This was an embarrassing moment, but a memorable one!

← Simple tips understanding injuries are very different … Part 1 of 2
Laughter as brain injury medicine … what did I ask for? →